S learned how to make the sign of the cross this week! I cannot TELL you how much this delights my mothering spirit. 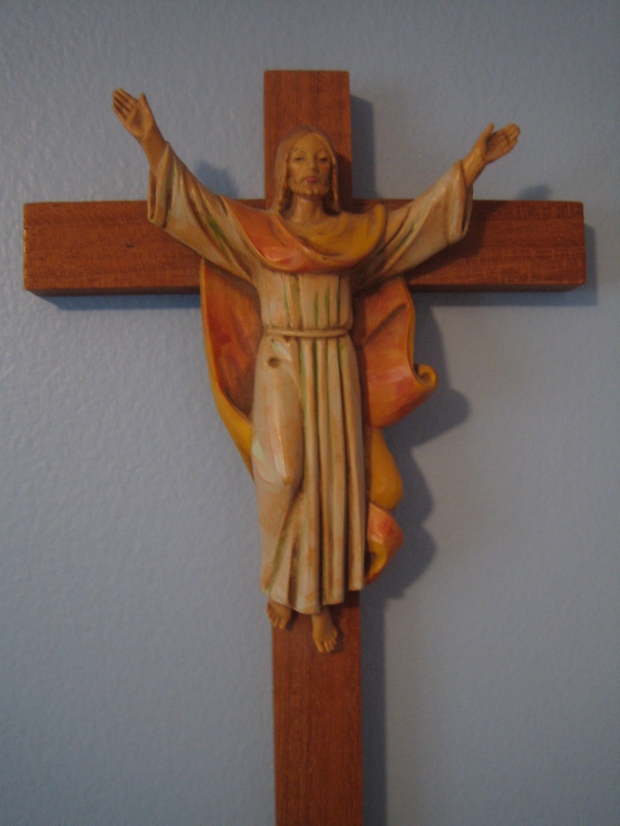 Ok, let me back up. He doesn’t actually make the whole sign of the cross. Although he does start with his hand on his forehead, accompanied by giant grin and chuckle.

But he does say the words.

Ok, he doesn’t actually say all the words. But he’s got the important ones down. When prompted with the introductory “In the name of the…” he will happily reply:

(ok, that last one trails off, too)

BUT THE CHILD IS NOT YET TWO. So I still feel justified in celebrating this as a milestone in spiritual/religious development.

And just in case no one in the theological world has yet made the leap from toddler prayers to Karl Rahner, allow me to try.

A few months ago, I came across a great discussion of the Trinity in a book I was reading on theology of work, Responsive Labor by David H. Jensen. The author quoted Rahner’s lament that the central, practical doctrine of the Trinity had gotten so estranged from the work of modern theology:

Should the doctrine of the Trinity have to be dropped as false, the major part of religious literature could well remain virtually unchanged.

Ouch. There’s a Rahnerian zinger if I ever heard one.

Jensen went on to describe how absolutely crucial it had been for the early Christians to try and figure out what it meant that God was a Trinity:

The early Christians were convinced that something new was manifested in the life, ministry, death, and resurrection of Jesus Christ – the full presence of God’s very self in the flesh. God does not hold back from humanity in the incarnation, but whispers and offers God’s fullness. The doctrine of the Trinity, then, did not arise out of speculative concerns about the nature of God’s inner person, but out of the practical concern of connecting the salvation proclaimed in Jesus Christ and sustained by the Holy Spirit to the God known in the covenant and people of Israel.

I love this thought: that the Trinity was not some esoteric theological idea that the early church came up with to explain God. It was the result of real Christians wrestling with the puzzling reality that somehow this Jesus was the same God as the God of Israel and the Spirit that remained among them after Jesus left.

How could that possibly be? What did that all mean? How could they ever wrap their heads around that?

So I celebrate this little Trinitarian moment with S this week: the first baby steps towards his own wrestling with what it means that God is Father, Son, and Holy Spirit.

As the Trinity, God is a community, a three-in-one. As we are made in the image of God, we are called to live in community with one another as well: in families, in marriages, in friendships. What could possibly be more practical than that – being able to look to the God who created, redeemed, and sanctified us for a model of how we are to live together?

And so I ask you – who has the better final word on the subject:

The doctrine of the Trinity is not above all a theory about God’s ‘internal self-relatedness’ but an effort to articulate the basic faith of Christians: In Jesus Christ, the ineffable and invisible God saves us from sin and death; by the power of the Holy Spirit, God continues to be altogether present to us, seeking everlasting communion with all creatures.

(I’m inclined to side with the ankle-biter.) 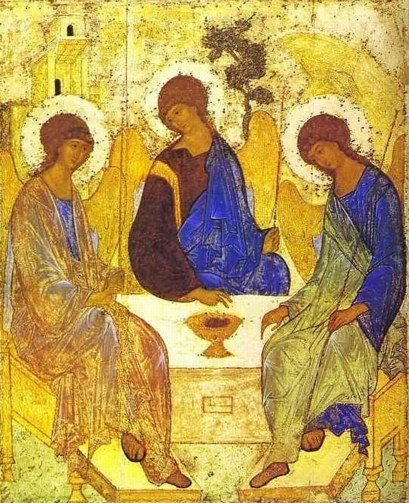